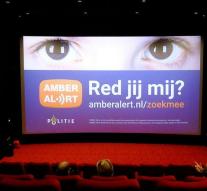 - Parts of the AMBER Alert system used last year 74 times for detecting urgent missing children. In 81 percent of cases, the child was recovered within a week. Almost all children, but two were back home within a month. This is evident from annual figures of AMBER Alert, the nationwide alert system for urgent abductions and missing children.

The nationwide AMBER Alert system is twice last year successfully used to recover from Utrecht and Vleuten two missing children within 24 hours. For them there was danger to life or risk of serious injury. In those cases nationwide warning issued through highway signs, advertising screens, apps, SMS and email.


Approximately 11.7 million Dutch are achieved by the official AMBER Alert. Since November 2008 is 22 times assumed such a warning.