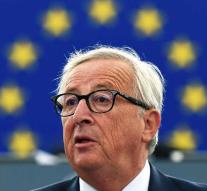 strasbourg - European legislation needs to be put in place to tackle the spread of terrorist messages via the internet. This video or audio fragment must be offline within an hour.

This proposal was made by President of the European Commission Juncker Wednesday morning during his very last State of the Union, his annual speech to the European Parliament in Strasbourg. Companies that do not cooperate can receive hefty fines: up to 4 percent of the annual turnover.

The Luxembourger seized the opportunity to argue for a stronger Europe on the world stage. Among other things, he came up with proposals in the area of ​​migration, security and foreign policy.

Juncker wants to show that this committee is not going to sit on its hands in the last year. He will not return for a new period after the May 2019 European elections.

In the field of security, more can be expected besides the approach to online distributed terrorist messages. Elections must be better protected against disinformation campaigns. Parties that try to influence next year's European elections and violate rules for data protection will be fined heavily.

Migration remains an important theme. By 2020, there should be 10 000 additional European border guards. At the same time Juncker wants the return of rejected asylum seekers to go faster, but also that there are good opportunities for legal migration. 'We need well-trained migrants,' says Juncker.

The European Public Prosecutor's Office should be given more opportunities to tackle cross-border terrorism.

Juncker proposed making common European decision-making easier in the field of foreign policy. For this, he believes that unanimity is on the slant. Like many other cases, he advocates decisions by European ministers through a so-called qualified majority. Only a large group of countries can then stop something, one or two countries no longer.

According to the Commission President, it is important for the EU to become more active on the world stage. The Union represents an enormous economic power with a fifth of the total world economy, but sees it not translated proportionately into political power.

In that light, Juncker's plea for a larger role for the euro was also interesting. Although the euro is the number two currency in the world, the dollar is supreme. 'It is ridiculous that Europe charges 80 percent of its energy imports in dollars, while only 2 percent of that imports come from the US,' Juncker said. It involves an amount of 300 billion euros per year.

Before the end of the year Juncker therefore wants to come up with proposals to strengthen the international position of the euro.

Dutch MEPs are not very enthusiastic. Hans van Baalen (VVD) speaks of 'a federal sprint to the finish'. Including the lifting of the vetoes on foreign policy and also taxes the liberal does not mean. He is, however, pleased with a larger role for the European Border and Coast Guard. 'Crucial', says Van Baalen.

The Labor Party sees far too little ambition, such as in the field of tackling tax avoidance by multinationals. 'Europe is still too much of the market and big companies', says MEP Paul Tang. He states that too little has been achieved in the area of ​​a fairer tax climate. 'In the State of the Union Juncker does not come forward with any concrete proposal on how the European Union will offer people social protection. '