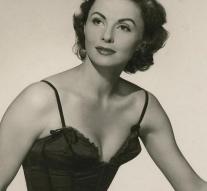 - The last living actor who played from 1942 in the famous American film Casablanca, the French actress Madeleine Lebeau is deceased at the age of 92. Her family has it announced this weekend, the BBC reported Sunday.

Lebeau died on May 1 in the Spanish resort of Estepona. She was married to French actor Marcel Dalio (1899-1983), when Germany invaded France in 1940. The couple fled and ended up in Hollywood. Lebeau got there in the movie Casablanca by Michael Curtiz, the role of the French refugee Yvonne and ex bartender Rick, played leading man Humphrey Bogart (1899-1957).

The film about a bar (Rick's Café) in it by the pro-German Vichy French regime dominated Morocco, premiered in November 1942. Lebeau crack in a famous scene from the French national anthem, La Marseillaise. She played in two American films before returning to Europe after World War II. She played mostly in France at least another twenty other films including Une Parisienne (1957) and '8.5' (1963).