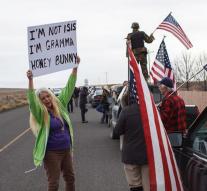 portland - The last four occupants of a game park in the US Oregon have surrendered Thursday. The last occupant repeatedly threatened suicide before he gave up. This marked the end of a 41-day standoff between occupation forces and the Federal Police FBI.

The occupation of the park began on January 2nd. The occasion was a lingering conflict over control of land from the federal government. Specifically, the anger was directed against the conviction of two farmers who burned down their country in 2012 as a preventative measure against forest fires. The action was a protest against the control of the federal government over millions of hectares of land in the American West.

The impasse during the occupation, to originate which was led by two brothers, arrived Wednesday to a climax after the arrest of their father in Portland. Thursday he was accused of plotting an attack on a federal police officer and obstruction of justice in connection with the conflict in 2014 on federal land near his farm.