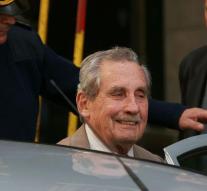 montevideo - The last dictator of Uruguay, General Gregorio Alvarez, is deceased at the age of 91. Which announced a military hospital in Montevideo, Uruguayan media said.

Alvarez was from 1981 to 1985 at the head of the military junta that ruled the country. During this period Uruguay had the largest number of political prisoners in the world and the country was known as 'the torture chamber of Latin America.' Alvarez handed over power in 1985 to the Supreme Court after the soldiers had agreed under pressure from mass protests in free elections.

The last dictator was later sentenced to 25 years in prison for the murder of 55 political opponents. He was stuck since 2007.