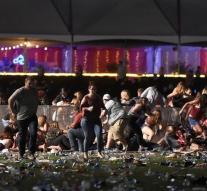 las vegas - The shooting game in the gambling city of Las Vegas is the largest in the history of the United States, now the death rate has risen to fifty. This makes the shooting a macabre list.

Orlando: 29-year-old Omar Saddiqui Mateen opens the fire in a homoclub in Orlando in June 2016. Certainly 49 people are killed and more than fifty people get injured. The perpetrator eventually dies by police fire during hostage.

Virginia Tech: At the campus of Virginia Tech University in Blacksburg, 23-year-old student Seung-Hui Cho shot 32 people in April 2007. An unknown number of others gets injured. The perpetrator commits suicide.

Sandy Hook: 20 children and six adults die in December 2012 at Sandy Hook primary school in Newtown (Connecticut). Adam Lanza (20) shoots the children of six and seven years old and six adults before robbing themselves of life. Later he also appears to have murdered his mother.

Killeen: The 35-year-old George Hennard bumped in October 1991 with his truck against a cafeteria in Killeen (Texas). After leaving, he shot 23 people, after which he directed the fire to himself.