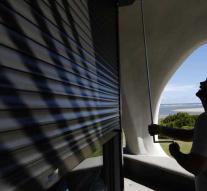 holden beach - More than one and a half million people on the American East Coast have been ordered to leave due to the arrival of Hurricane Florence. The super storm is the toughest to threaten the area in three decades. Florence is currently a hurricane of the fourth category with wind speeds of up to 210 kilometers per hour.

According to the National Hurricane Center in Miami, the storm is expected to land on Friday in the border area between the states of North and South Carolina. In the latter state, a million people have received the urgent advice to leave from Tuesday afternoon. Governor Henry McMaster pointed out the effects of hurricane Hugo in 1989 when 27 people died in the state. 'You better take it for the uncertainty', according to the politician.