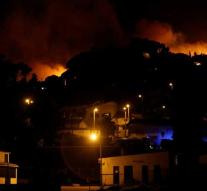 lisbon - A large natural fire broke out in a national park on the coast of Portugal. The newspaper Jornal de Notícias reports that more than five hundred firefighters fight the conflagration spreading over the natural park of Sintra-Cascais, west of the capital Lisbon. The inhabitants of neighboring villages are evacuated as a precaution.

The fire broke out on Saturday night and was fueled by the wind from the sea. On images you can see a mountain ridge that is ablaze. Mayor Basílio Horta from Sintra says he is keeping a close eye on the situation and that the fire department is doing everything to fight the fire. President Marcelo Rebelo de Sousa is also on the spot.