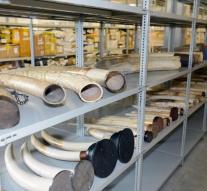 - In two houses in the Austrian capital Vienna has discovered the police together ninety elephant tusks. It involves one of the greatest finds of ivory in the EU.

The police had the stock on the track after witnesses had seen three tusks were traded on the street. The tusks, with a street value of about half a million, were hidden in blankets behind cabinets. The origin is examined in a laboratory. Police arrested two suspects. The ivory trade has been banned since 1989.