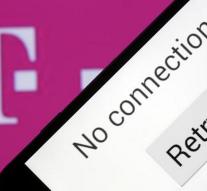 - Through an Internet outage nearly one million German households had to adjust it for some time without TV and internet. Especially the customers of Deutsche Telekom were victims. The problems started Sunday at the end of the afternoon. The provider had problems until Monday in the course of the day under control with software updates and palliatives. The reason was, according to Deutsche Telekom a failed attempt to hack routers for a major Internet attack.

Only DSL routers of the delivered brand Speedport by Telekom fell out. The German security service for Information Technology (BSI) then already expressed the suspicion that there had been a targeted attack by hackers through an open gateway to the router. Worldwide installed that way malware. This is attempted on the network of government, which is protected by BSI.

The head of security at Deutsche Telekom told German media that it was indeed a failed attempt to create a large number of consumer routers Mirai part of the botnet. That is a type of malware designed to change routers remotely controlled bots for major Internet attacks.