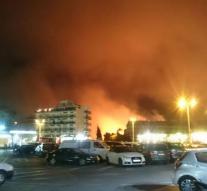 javea - Probably thousands of tourists and Spaniards have been evacuated because of a large fire on the Spanish Costa Blanca.

The fire raging in the village of Javea, south of Valencia. Although the fire was under control before the fire flared up again. Twenty houses have already gone up in flames. Nearby villages have been evacuated.

On Twitter are countless pictures to find the fire, some placed by anxious tourists who are seen at their apartment in flames. The Dutch Peter Frank currently celebrating holidays Javaé. 'There have been evacuated several neighborhoods. It is very hot and there is a strong wind ', he says.

This is crazy. I think my car and maybe my apartment is on fire. I hope everyone in Javea is ok pic.twitter.com/gbYjTEZuj0