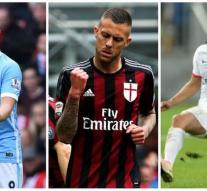 nanterre - Hundreds of French people in a suburb west of Paris obtained a driving license without any exam. The French judiciary has dismantled a network that has earned an estimated one million since 2013 to provide approximately three hundred licenses, the newspaper Le Parisien reported Saturday.

Driving licenses issued by accomplices who worked with the competent authority. Key figures in this fraud are automobile driving school owner Patrick Antonelli (39) and three officials of the department of Hauts-de-Seine Nanterre.

Antonelli is the husband of a French singer Amel Bent. He had among his clients figures from show business, the media and business world and sports. A famous French television presenter Ali Baddou, driving with a license of this network around. There were football players like Samir Nasri (Manchester City), Jérémy Ménez (AC Milan) and Lyvin Kurzawa (PSG) among the customers. Numerous customers of the fraud team found that they had no time to take driving lessons and doing exams. They would readily 10. 000 have counted down for the license.