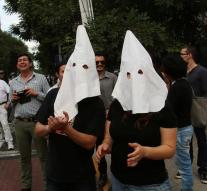 - "In Mexico Saturday, hundreds of thousands of people took to the streets to demonstrate against gay marriage. According to the organizers of the demonstration were 300,000 people on the leg."

"The protesters oppose a bill to allow same-sex marriage across the country. In include Mexico City, Veracruz and Puebla protest marches were run by conservative groups who had the support of several archbishops."