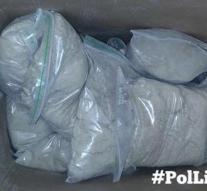 - The police Tuesday afternoon in a shed at St Gerardusweg Maastricht made a major drug discovery. It is probably more a small 70 kilos of heroin, the police released Wednesday.

As part of the same investigation were searched two houses elsewhere in the city. One of these agents found means to cut with drugs. No arrests yet, but police do not rule out later done so.

A gram of heroin costs according to Jellinek addiction 20 to 40 euros. Thus the drugs found in Maastricht have a street value of 1.4 to 2.8 million.