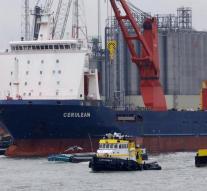 antwerp - The Belgian customs authorities intercepted a total of more than 1.9 tons of cocaine in June and July. The three parties were hidden in containers that entered the port of Antwerp. Reported that the Ministry of Finance Wednesday.

The estimated street value of 1.9 tons of cocaine between 75 million and 135 million.

The finds were all done on ships from South America. The largest party was 732 kilograms, divided into 21 sports bags Customs on June 28 saw a ship from the Brazilian Santos. Two weeks earlier was 579 kilos found on a ship from Ecuador.


The latest discovery took place on July 13, again on a ship from Santos. There was 604 kilos of cocaine hidden in sixteen sports bags. Whether there is a connection between the three discoveries, is not known.