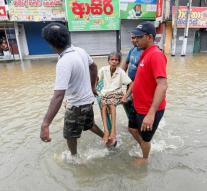 colombo - Landslides caused by heavy rainfall have cost many lives in Sri Lanka. Rescue workers fear that still unfortunate will be those who are engulfed by mudslides in the middle of the country more than 150 victims.

The exceptional rains for three days forced almost 200 000 Sri Lankans to leave their homes. The region around Aranayaka, 100 kilometers northeast of capital Colombo, is the hardest hit. Three villages were buried.