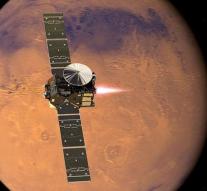 darmstadt - Europe has begun to attempt to make a machine on Mars. Those rustic, Schiaparelli, has been released by the probe that has brought him to Mars. In the coming days he sinks slowly to the planet where he must come down Wednesday careful.

Flight controllers in Germany received Sunday at the end of the afternoon the signal disconnection was successful. That signal bent over almost 10 minutes to reach the earth. The mission is carried out with Russia.

The Schiaparelli is primarily designed to test the technology for a landing on Mars. He also has a few days of energy to the wind speed, air pressure, temperature and humidity measuring around him. Around 2020 Europe and Russia to send an unmanned cart to Mars to explore the surface.

Europe has once previously tried to land on Mars. That attempt, the Beagle 2 in December 2003, was a failure. The scout has never let hear from him. He was found only eleven years later. The solar panels were not open, so the antenna remained hidden.