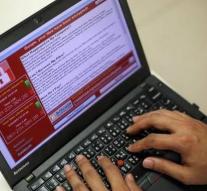 amsterdam - The malfunctioning of the LAKS website examenklacht.nl since Thursday proves to be caused by a ransomware attack. That's what a spokeswoman said. 'We have been affected by the same cyber attack that last week affected hospitals in Britain.'

The website of the LAKS (National Action Committee Students) had been unreachable since Thursday at 16.00 hours. Only Friday at the end of the morning was an exam complaint. Nl again online.

The LAKS has not paid a ransom to be able to go back to its own computer files and is certainly not going to do it. 'We are happy to back up all complaints about the school teams this year. These were put on another server this morning. 'According to the spokeswoman, the website was again in the air at the end of the morning.

Due to the malfunction, few complaints have been received on Thursday's exams. 'Especially around the vwo exam chemistry we expect a lot. That was still underway when we were hit by the attack. '