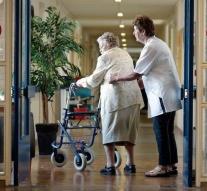 amsterdam - A shortage of nurses provides more expensive care and longer waiting lists. Manager Ab Klink of health insurer VGZ and Sonja Kersten, director of the Nursing \u0026 Careers Association of the Netherlands, reached the emergency clock on Wednesday in the Financieele Dagblad. They speak of a structural and urgent problem within the sector.

A growing shortage of nurses forces care institutions to give higher salaries, bonuses and even housing to attract staff. But that's 'symptom control' and only wages increase wages, Klink warns.

With higher wages, 'the care institution solves its own staffing problem, but she draws people away from a place where they would work differently,' says Kersten. As a consequence, the work pressure is getting higher, as a result of vacant seating, Klink adds.

According to the former Minister of Health, it is important to look at where unnecessary care is provided and where staff are thus unnecessarily deployed. 'For example, Klink wants a shift of care from the hospital to the general practitioner and district nursing to reduce the pressure on the hospital in hospitals.

Both argue for better cooperation at regional level and between health insurers and municipalities to address the problem.