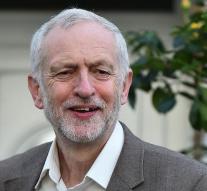 london - The controversial leader of the Social Democratic Labour Party, Jeremy Corbyn, is still under heavy fire in their own ranks. The half-hearted way he tried to make clear that Labour is against the Brexit, has driven his group in the British Parliament to anger and despair.

In the British system, the opposition also has a kind of government ready to follow the policy of the true ministers closely. The opposition as a 'shadow cabinet' where the leading parliamentarians participate. A large part of this shadow government has angrily resigned since the referendum on Thursday.

Monday Corbyn still refused to leave the field. He replaced to want to lead the runaway members of the shadow cabinet and said the party until the next parliamentary elections. Tuesday night the party considered a vote of no confidence against Corbyn.