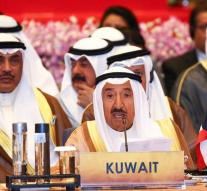 - The Emir of Kuwait, Sabah al-Ahmed, has dissolved the parliament of the Gulf state and announced new elections. In a rather cryptic royal decree state according to the state news agency Kuna that ' given the circumstances in the region and the security is better to let the people decide. 'It is the seventh election in a decade.

The oil is Kuwait dominate political tensions are now quite cut should be. The government wants to do this by addressing people who receive long-term benefits. Government and opposition were strongly divided on the cuts.

The emir gave no date for new elections, but according to Kuwaiti law requires elections to be held within 60 days after the dissolution of a parliament.

The Emir of Kuwait (an ally of America) has a lot of power and stands above the government.