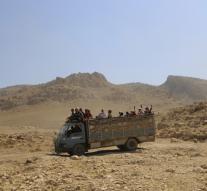 erbil - Kurdish fighters say again to have stumbled upon mass graves of Yazidis in northern Iraq's Sinjar region. The graves were 113 bodies of Yazidis who were killed at a public mass executions.

One of the graves was discovered about twelve kilometers south of the town of Sinjar. It was undermined with explosives. Those are rendered harmless by the Kurdish fighters.

Are regularly discovered mass graves in northern Iraq's Yazidis who constitute a religious minority in the country. Terror Islamic State Movement (IS) has captured a part of northern Iraq in the summer of last year. The terrorists abduct and kill Yazidis, because they are seen as devil worshipers.

The Iraqi Kurdish peshmerga knew IS penetrate ever further back with a offensive this month.