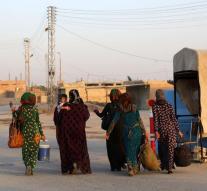 brussels - The Kurds demand in northern Syria to the European Union's support. Every day people because medical care is lacking. Also help to build up the areas on Islamic State retook again,, so that people can return. ' That said Salih Muslim, Co-President of the Syrian Kurdish PYD party, Thursday in the European Parliament.

The Turkish army and Syrian rebels began over a week ago an offensive in northern Syria. They freed the border town Jarablus IS of the terrorist group, and then turned their weapons to the militias of the Syrian Kurds.,, Turkey depicts us as terrorists, 'said Muslim, whose party is closely linked to the outlawed Kurdistan Workers' Party PKK. He spoke in the European Parliament at the invitation of the right-wing Slovak deputy Branislav Skripek.