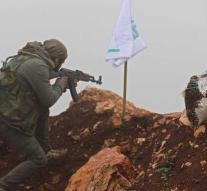 damascus - The Kurdish authorities in the Afrin region have appealed to the Syrian regime. This should 'protect the borders with Turkey against attacks by the Turkish occupying forces,' the regional board said.

The Kurdish groups that govern the area call on the government to send troops to 'secure the boundaries of the Afrin area'. The regime of Bashar al-Assad has spoken out against Turkish action, but does not recognize the autonomous Kurdish governing bodies either.

Turkey sees the Kurdish militia in the area as extensions of the banned PKK movement. Ankara says he wants to expel terrorists from the border area.