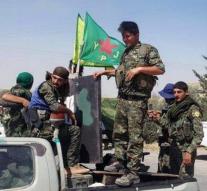 ankara - Fighters of the Kurdish YPG militia graves in the northern Syrian city of Manbij. They make no attempt to leave the city, as demanded the Turkish and US government sources said the security forces. There would just reinforcements arrived.

Trucks and vans with weapons, equipment and men would ride towards Manbij.

The YPG and its allies conquered Manbij earlier this month after a long siege by Islamic State and the YPG ever won more field along the Turkish border. The advance of the YPG is Turkey, that the militia considers the Syrian branch of the Kurdish separatist PKK, an eyesore.


Last week was the Turkish government, the United States, the main pillar of the YPG, so far as the retreat of the YPG in Manbij and environment demand. Kurdish fighters should retire according to the US on the eastern or left bank of the Euphrates River.

The YPG let them know his men, who had taken the flag of the Syrian Democratic Forces (SDF) Manbij, have retired. Turkey can not justify an attack on the city on the grounds that there are hiding Kurdish fighters, the YPG said.