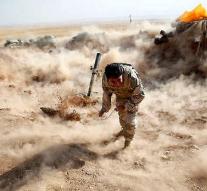 brussels - Iraqi Kurdish fighters have Belgium Tuesday begged for help in the fight against Islamic State. The Peshmerga argued during a hearing of the parliament that the terror group has captured tanks, drones and modern weapons.

The Kurds have as Peshmerga General Jafar Mustafa Ali, in turn, deliver battle with " old Soviet weapons ". They therefore ask the Belgians to arms and ammunition, but also matters such as intelligence, trainers and material protection against chemical attacks.

Belgium has sent dozens of military instructors to Iraq, but which are housed in Baghdad. The Kurds would therefore receive insufficient support. " Baghdad even working against us, " said Jafar Mustafa Ali. " The money we have, we have a right to be not and arms supplies from abroad difficult. "