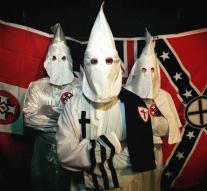 - Among the few US media cheering campaign of Donald Trump, there is one in particular: The Crusader, the main mouthpiece of the Ku Klux Klan or 'the voice of white Christian America. ' In the latest edition of the quarterly magazine of the entire front page devoted to the Republican presidential candidate under the heading 'Make America Great Again.'

Pastor Thomas Robb wrote the article in which he praised Trump ideas and plans and refers to the forefathers that America ever since then. Against the Washington Post, he said that his outpourings no official endorsement for the Republican billionaire, who perhaps something to criticize. ' But in general we appreciate his very nationalistic views and his comments about closing the borders to illegal aliens. ''

The Trump campaign leadership rushed to distance themselves from the voting recommendation of the 'white resistance movement.' ' We reject all forms of hatred. This publication is repulsive and their views do not represent the tens of millions of Americans who stand behind us. ''