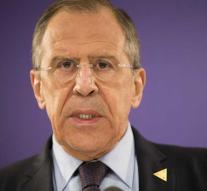 moscow - The fighters who still control the northwestern Syrian Idlib province must be eliminated there soon. Russian Foreign Minister Sergei Lavrov said this after an interview with his Saudi colleague Adel bin Ahmed al-Jubeir. Lavrov spoke about 'terrorists who form a tumor.'

According to him, they use civilians as human shields and are eager to even stage an attack with chemical weapons. They do so just as in the hope that Western powers, especially the US, take military action against the Syrian armed forces, according to Russian media.

The Kremlin rescued the regime of Syrian President Bashar al-Assad, along with Iran and the Lebanese Shiite Hezbollah movement in the Civil War. Assad dominates by far the largest part of the country, but in the northwest mainly Sunni extremists in the province of Idlib stand.

This is roughly in an area between Aleppo and the western Turkish border and to the south to about 20 kilometers north of the city of Hama. To the north of this area, Turkey in Syria supports fighters who describe Ankara as moderate opponents of Assad's regime. In Idlib, in consultation with Russia and Iran, Turkey also has military observation posts along the front to monitor the ceasefire. But Russia now wants to address the heart of this jihadist stronghold.

In the region, an estimated three million people live in appalling conditions and often terrorized by jihadist groups and air strikes. There would be 800 000 displaced persons.