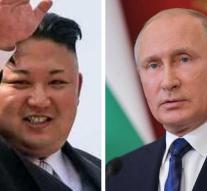 moscow - During an international economic conference in September in Vladivostok, Russian president Putin and North Korean leader Kim Jong-un can meet. The Russian Minister of Foreign Affairs, Sergey Lavrov, discussed this during his visit to Pyongyang last week, the Kremlin reported Monday.

However, no concrete agreement has been made. At the economic forum in port city Vladivostok many investors from the Far East are expected. The city is located 120 kilometers from the North Korean border.