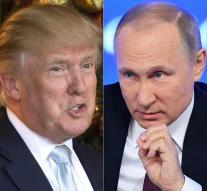 moscow - Russia denies that US President Donald Trump and his Russian colleague Vladimir Putin had a 'secret meeting' during the G20 summit. The leaders had at least an informal conversation during a dinner for government leaders, a spokesman for the Kremlin said Thursday.

Putin and Trump had a formal meeting at the Hamburg summit. It soon became apparent that the men had also spoken in the German city a second time. That happened when Trump took place at dinner next to Putin.

According to the US President, the conversation lasted about fifteen minutes and consisted mainly of exchanging 'politenesses'.

The undercut led to eyelashes in the US because of the tense relationship between Washington and Moscow. The Russian government spokesman said it was 'absurd' to talk about a 'secret meeting'; The leaders would have clattered informally and, among other things, talked about adoption.