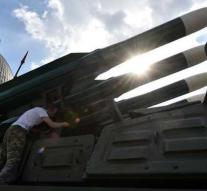 moscow - The researchers of the Joint Investigation Team (JIT) have shown Buk missiles on Thursday of a type that has not been used in Russia since 2011. This is what the Russian Ministry of Defense says according to Russian media.

The anti-aircraft missiles were made in the Soviet Union in 1986. As usual, they have been taken out of service for a period of 25 years for safety reasons to be replaced by more modern missiles or a more advanced anti-aircraft system.

Ukraine has 20 buk air defense systems, but has never acquired new rockets since 1991. Kiev did not replace them, according to the Russian ministry. Russia is wondering why the JIT researchers do so mysteriously about where this rocket was found and from whom they got it. The ministry suspects that the origin of 'the evidence' is deliberately kept secret because the projectile may come from the Ukrainian armed forces.