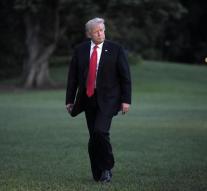 washington - Donald Trumps campaign team had a meeting with a lawyer from the Kremlin last year because they would have information about Democratic presidential candidate Hillary Clinton. That's what the American newspaper The New York Times reports.

The NY Times is based on talks with three White House advisors who have been informed about the meeting. Also two other people who spoke the newspaper would have been aware of the meeting, which took place on 9 June in the Trump Tower in New York- two weeks after Trump won the Republican nomination.

The son of Donald Trump, Donald Trump Jr., his son-in-law, Jared Kusnher, and campaign leader Paul Manafort took the honors true, according to the newspaper. Whether the lawyer, Natalia Veselnitskaja, has actually shared information about Clinton with her interlocutors is not clear.

The newspaper claims that the revelation is of great value, as there were indications for the first time that members of the Trump team stood open for the help of the Russians. At the moment, the US justice is investigating whether Trump has collaborated with the Kremlin to become president of the US.