Home / World / Korea's: peace at the end of the year 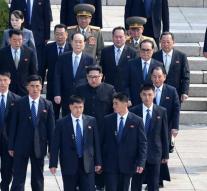 seoul - The leaders of South and North Korea, President Moon Jae-in and Kim Jong-un, stressed at the end of their summit that they want peace and no nuclear weapons on the peninsula.

This is stated in their statement that speaks of 'a permanent and solid peace' and an end to the mutual enemy actions. This year, too, the Korean War, which raged between 1950 and 1953, must have officially ended, but never officially ended.