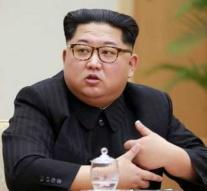 seoul - The leaders of South and North Korea will also have dinner on Friday and then find a menu with a wink to the past. Moon Jae-in and Kim Jong-un meet in the border town of Panmunjom.

Kim, for example, is presented with Swiss rösti 'with a Korean twist', and announced the office of the South Korean president. The potato dish refers to the youth that Kim spent part of in Switzerland, although Pyongyang never officially confirmed this.

Moon will find, among other things, a fried sunfish on his plate. And that must remind him of his youth in the port of Busan. He gets special Pyongyang noodles that he also asked for. The gentlemen will be able to rinse the dishes with a special wine made from azaleas, according to the Blue House, Moon's headquarters.