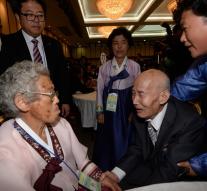 seoul - A Korean couple is finally reunited after 65 years. The 88-year-old South Korean Lee Ok- yeon became her husband ( 87 ) lost by the Korean War and were together today, after all that time again to embrace.

" When I heard it, I could not believe it. I thought they were kidding me kept ", Lee said about the moment when she was selected for the special meeting.

For the first time since February last year, there are family reunions on the separate peninsula. Under the leadership of the Red Cross traveled about 390 elderly South Koreans this morning by bus to a resort at Mount Kumgang in the North.