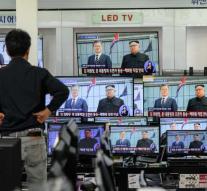 seoul - The director of a South Korean television channel resigns because his daughter terrorized her driver. In the media, a recording had appeared that showed how the 10-year-old kid scolded the man and threatened to have him sacked, reports South Korean media.

The father of the girl, director Bang Jung-oh of TV Chosun, went through the dust in a statement. He apologized to the driver and said he would take responsibility for his daughter's behavior. He therefore lays down his function at the transmitter.