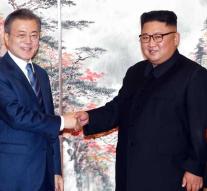 pyongyang - The leaders of North and South Korea visit a volcano on the Chinese border on Thursday. The active volcano is called the Paektu Mountain and is revered by many Koreans as a spiritual source of the country.

The three-day summit of the North Korean dictator Kim Jong-un and the South Korean president Moon Jae-in is proceeding in North Korea to appear in a very warm atmosphere. The summit ends Friday.

On Wednesday, Kim promised to dismantle critical rocket installations and said he was ready to close the main nuclear center in North Korea if the US also did something similar. Kim also said she would like to visit Seoul soon. He is the first leader in the reign of terror that his grandfather Kim Il-sung (1912-1994) founded, who after the Korean War of the early fifties took a step on South Korean soil. He did this in April on the border between the two Koreas during the first summit with Moon.