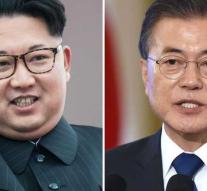 seoul - South and North Korea want to put an end to the military conflict between the two countries during their joint summit this month. The two nations are officially still at war, but there has been a truce since 1953. The countries would have consultations prior to the summit, according to South Korean media.

One of the steps would be to return the DMZ (Demilitarized Zone) to its original state. The four kilometer wide zone of no man's land runs along the line where the Korean War ended in a truce. The demilitarized zone is full of landmines and barbed wire and is guarded by soldiers from both sides.

The meeting between the South Korean president Moon Jae-in and Kim Jong-un is scheduled for April 27th.

A successful summit would pave the way for a meeting between US President Donald Trump and the North Korean leader.