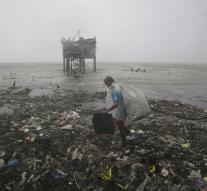 - At least four deaths, massive power outages and tens of thousands of people who have had to leave their homes. The typhoon Koppu leaves a trail of destruction in the Philippines.

The typhoon reached Sunday morning local time, the Philippines on the northern island of Luzon.

The typhoon is moving slowly across the land. The Philippines have to deal with torrential rain, floods and high waves more than two meters. Account should also be taken of landslides. In the province of Nueva Ecija drowned two people.

In Tarlac province was shot dead by lightning. In the capital, Manila was a person killed by a tree that fell over. Koppu rages until Tuesday on the Philippines and then heading on Taiwan.