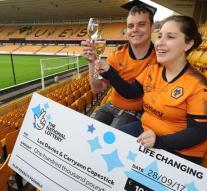 - An English couple who won over 111.500 euros in a lottery was robbed eleven days later. They were attacked at home by an armed gang while sleeping in bed. 'Almost two weeks we were in ecstasy and then this happens,' said prize winner Lee Davies.

The masked robbers pushed in and shouted: 'Where is the money? Where is gold? 'Then a robber with a metal rod ran into his hand on the woman and forced him to go out of bed.

The gang eventually ended up with almost 14,000 euros of jewelry and iPhones. It seemed that the perpetrators knew exactly what to do.

Lee Davies and Carryann Copestick won the amount of money with a scratch card. They were photographed last month in Wolverhampton Wanderes stadium when they celebrated their prize. Many local media wrote about the couple. A few days later they were robbed.

'After we had won, we were fulfilling our dreams. We had invested in a house and planned our wedding. We also bought clothes and jewelry, 'explains Davies to the Daily Mail.

Lee Davies, 27 years old, the father of the house, is relieved that the robbers did not bother his children. Three small children of nine years, four years and eight months old. 'They would be traumatized differently. '

The robbers wanted everything. 'They even tried to bring my daughter's birthday presents. '

It is not yet clear whether the couple goes on to marry. They are afraid of the future. The police are investigating the matter and are looking for tips.