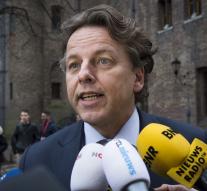 amsterdam - If the power minister Bert Koenders (Foreign Affairs), for the next government will get a minister or a Secretary of State for European Affairs.

He said Sunday in an interview with the Times on Sunday in the Rode Hoed in Amsterdam. In most EU Member States, there is a cabinet minister with special responsibility for Europe.

The current government is " not too big ", he said. His predecessors did have a secretary of state who was involved in European affairs. He'd also like to have " but I know that it can not ".

Prime Minister Mark Rutte does not want ministers in his government team. The Liberal leader thinks that the government should be smaller. And with a small team of ministers and state secretaries is a good example, he says.

Ministers in the first government of Rutte complained later that the number of ministers was too tight. So Hans Hillen 'd like to have a Secretary of Defense. Henk Bleker (State Secretary for Economic Affairs) stated afterwards that the workload in Rutte I " pinched ".