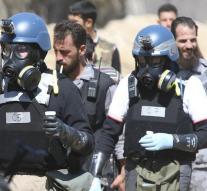 - Minister Bert Koenders of Foreign Affairs calls the use of chemical weapons in Syria,, totally unacceptable '' and calls to call the guilty to account. Koenders thus responding to the survey by the United Nations and the Organisation for the Prohibition of Chemical Weapons (OPCW).

The report showed that both the army of President Bashar al-Assad as a terrorist group Islamic State has used chemical weapons.

,, The use of chemical weapons by anyone, anywhere and under any circumstances, is a violation of international law and totally unacceptable, '' said the minister.,, The members of the UN Security Council must take responsibility, condemn the use and ensure that this does not remain unpunished. '


The UN Security Council will discuss the report Tuesday. Last week the results were announced.