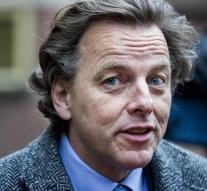 brussels - Minister Bert Koenders of Foreign Affairs welcomes the idea of ​​sending a EU mission to southern Libya. 'With a big' but ', he said Monday in Brussels. 'It depends on how it is shaped.'

Germany and Italy recently proposed such a border mission to dump migration to Libya, especially from Niger. The operation should prevent even more migrants from drowning in the Mediterranean. From Austria and Belgium, there were already consistent responses.

'That I want to understand better controls in that incredibly difficult area, but I do not know what resources we can put on the mat,' said Koenders, who are mostly on international law. 'Libya is a very complicated country. Does such a mission justify violence or reduce violence? People have rights, which must be completely elaborated. If you really want to be there, you need to know a lot more. '

The European Union already knows the maritime miser Sophia, who has to fight human trafficking from Africa by sea. For this purpose, the Libyan Coast Guard and Navy are trained. There is also a civil EUBAM mission that should assist the Libyan authorities in strengthening border control. However, its staff is in neighboring Tunisia because it is insecure in Libya.

EU Foreign Minister Federica Mogherini said last week that the German-Italian proposal has not yet been officially submitted. However, Italian suggested that existing EU missions in Libya, Mali and Niger could be strengthened to combat arms trafficking and crime.