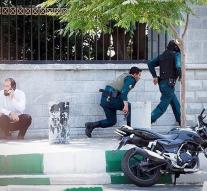 the hague - Minister Bert Koenders of Foreign Affairs condemns the two attacks in Iran's Iranian capital Tehran. 'His ministry is following the situation closely. At the onslaught in the parliament and mausoleum of ayatollah Khomeini Wednesday, there were certainly twelve deaths. Terror Group IS has claimed the responsibility.

The relationship between the Netherlands and Iran has improved since an international agreement has been reached on Iran's nuclear program in 2015. Several Dutch government officials were already on trade mission in the oil and gas rich country. Last year, for a first time in ten years, an Iranian Foreign Minister officially visited our country. He spoke among others with Prime Minister Mark Rutte.