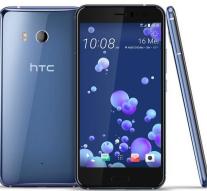 taipei - HTC launched its newest U11 smartphone on Tuesday, which allows users to launch apps by pinching the side of the phone. It is the first smartphone with this operating technology next to the touchscreen.

The pinch technique is called HTC Edge Sense and consists of pressure sensors on the side of the device that control apps such as the call function, camera or Google assistant.

The smartphone has a 5. 5 inch screen, slightly larger than the HTC 10. There is a 12 megapixel camera on the back of the device and in the front we find a 16 megapixel camera. The housing is made of multiple layers of glass instead of metal. The smartphone includes a Qualcomm Snapdragon 835 chipset and has a working memory of 4GB.

The watertight device does not have the traditional headphone input but a usb-c port. The included earbuds provide hi-res audio and active noise cancellation.

The new smartphone is of great importance to HTC. The Taiwanese have great competition from the Chinese parties Huawei, OPPO and Vivo and the market leaders Apple and Samsung.

The HTC U11 is available in the Netherlands in early June in the colors of silver, black, dark blue and white. Abroad, a red variant also circulates. The advisory fee is 749 euros for both one and two sim cards.