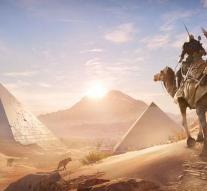 - Cologne is currently the place to be for gamblers. The Telegraph was present for two days to try out the latest game titles. Today the second report from the German trading floor.

Game publisher Ubisoft takes a great deal on Gamescom 2017. For example, Far Cry 5, Mario + Rabbids Kingdom Battle, Southpark: The Fractured But Whole, The Crew 2, For Honor and Tom Clancy's Rainbow Six Siege playable on the fair. We focus on the assassin's Assassin's Creed Origins and the unpolished pearl Anno 1800 announced in Cologne.

The hardworking team behind the Assassin's Creed games series will not like to hear, but the sledding is a bit up with the latest titles. To silence the Hollywood movie, with stars Michael Fassbender and Marion Cotillard. It was just underweight. Origins feel in everything as a reboot. The perfect opportunity to make a clean ship by choosing for a time that goes a lot further than we are used to: Hellenistic Egypt.

This is a lot faster than Anno 1800, which will only be in stores by the end of 2018. The reason that it was shown in Cologne- we could only look at a very early build- is in the launch of Anno Union. Through this online platform, developer Blue Byte is in direct contact with the fanbase. We became oblivious that this is more than a forum where trailers and news will be shared. Fans are actively asked for input and pollinated with questions throughout the development process. This must ensure the best possible product at launch, without the many technical defects that so many major titles currently face when they appear.

The game itself will have the nineteenth century as a theme. An era of industrialization, an emerging and self-conscious working class, imperialism and great military progress. Diplomacy, Warfare, Multiplayer... Elements that missed in the previous Anno title (the futuristic Anno 2205) but returned in Anno 1800. We became dolenthousiast of the opportunity to build a zoo and then micro-manage them. The glimpse we had of the glass palace, the nineteenth century was the era of the major world exhibitions, making us look forward to more.

A particularly innovative game is Skyworld of Dutch developer Vertigo. This strategic title has been specially developed to play with a virtual reality headset. In a fantasy world that is performing in medieval times with grain mills, forges, knights and royal palaces, it is your task to further expand your empire. You will obviously come into conflict with other players. Then the fairytale game board changes into a battlefield where your men have to tactically use in turn to conquer a tile on the board. Vertigo ensures that the pots are short enough to play with a free headset. Also ideal for people suffering from motion sickness and thus regular free games, turning around speed or intense action leave left. The game image looks calm and clear. But as always, the special controls require some hassle. Provisional confirmed for use with Oculus Rift and HTC Vive.

Yesterday we talked about The Elder Scrolls V: Skyrim for the Nintendo Switch. But that was not the only version of the game that was featured on Gamescom. We have also been able to play Skyrim with the PlayStation VR. The PlayStation 4 game uses a teleportering mechanism to move. It may feel a little less natural than walking, but for people with motion sickness it prevents a lot of nausea. Fighting feels intuitive and it's surprising how much the game feels like it plays right in front of your eyes. Certainly if a big red spider suddenly pops up.

The Xbox One X becomes Microsoft's powerhouse this year. The target group will be especially the fanatical gamer, but on the fair floor there are also three family games that are specially placed for the new console in a 4K jacket. Zoo Tycoon: Ultimate Animal Collection, Rush: A Disney Pixar Adventure and Disneyland Adventures are not only graphically enhanced, but new content has also been added. For example, Rush has added the world of Finding Dory. The games will cost € 29.99 per piece later this year. In addition, these family games are also playable on Windows 10 PCs for the first time.

Year after year, the influence of game publisher Warner grows. Due to the firm footsteps of the film world, the publisher has a barrier to film franchises. For example, the Arkham titles, in which Batman plays the lead, is very good. Another tie-in is the Lord of the Rings universe. This autumn, Middle-Earth: Shadow of War will appear, a direct sequel to the successful Shadow of Mordor from 2014. You still act as the ranger Talion behind enemy lines, deep in Mordor. The intention is to get armies of orcs under your control and confront the horror of Sauron.

During a play session, we saw how the main character Talion picked up against a just awakening Balrog, the well-known fire demon who got it in the movies with wizard Gandalf. Impact is the word here. Talion first takes possession of a giant tree giant called Carnan to tackle the Balrog. The dull clashes between Carnan and the Balrog are really epic. The game really knows how to call up the atmosphere of the movies and add new elements to it. Absolutely on wishlist.

A completely different upcoming Warner game is Lego Marvel Super Heroes 2. More of the same? If you know the Lego games a little... Actually. But with each title, developer TT Games tries to add something new to the game experience. This time, one tries to make the boss fights more dynamic. Please note! The starting point of a Lego game remains that (young) children can easily pick up. That means that no difficult combo's should be learned from the head. Whoever wants to tackle a boss by pushing the attack button very hard, is also coming away this time. But at the expense of a lot of 'lives' (Lego dolls never really die ').

In addition, this new superhero edition is packed with characters from the Marvel Stripuniversum. Thanks to the many movies and television series in which it is introduced one after another, the average gamer is known with names like Loki, Starlord, Thor, Venom and so on. We lay in a dent when Lego Starlord (from the Guardians of the Galaxy) started his walkman and began to dance to confuse enemies. And that remains the lego games: fun stairs.

The Telegraaf has been able to try out a variety of new game titles for two days at Gamescom. It promises to be a very nice autumn with games that will appeal to different audiences. Whether you're a fanatic gamer or even playing a game. Keep telegraph. Com / games reviews for reviews and news.