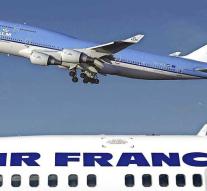 schiphol - KLM canceled two flights because of the closure of the airspace over Pakistan. According to the airline, this number can rise as the closing of the airspace above the...

KLM reports to monitor the situation closely and investigates the possibilities to fly via other routes. Passengers are informed and, where possible, rebooked.

Pakistan closed its airspace on Wednesday due to flared tensions with neighboring India over the controversial Kashmir region. Both countries are nuclear powers. They both report that two planes have been shot from the air, although the identity of the planes is still a mystery.