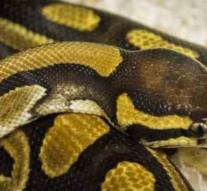 dusseldorf - During the clearing of an overgrown garden in Düsseldorf a mature king spython has emerged. Workers hit the approximately 2 meter long snake in a chest, reported the fire department.

The men immediately closed the chest and warned the fire brigade. That brought a reptile connoisseur who found out that it was a king pony, a non-toxic snake that occurs in the wild in West and Central Africa.

The snake was in good health and housed in a zoo in Brüggen. Where the animal comes from is being investigated.