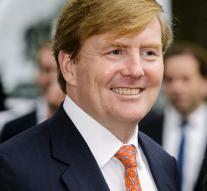 - King Willem - Alexander must during the state visit to China next week begins Sunday publicly draw attention to the human rights situation in the country.

That at least, Director of Amnesty Netherlands Eduard Nazarski, reports the NOS .

According Nazarski the human rights situation in China has not been as bad in the last twenty years. " People are really scared. People disappear and neither we nor their relatives know where they are. For the Chinese, it is therefore very important that the Netherlands come forth at this state visit on human rights and the rule of law. "

The king keeps October 28 in Shanghai a speech at a training institute for senior officials. Insiders suggest that the king will speak herein about the Dutch concern over human rights and the rule of law in China, but it is still unclear how explicitly he will be.