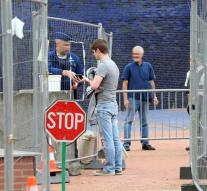 brussels - The Belgian King Philip will Tuesday visit the two police women who were stabbed to death Saturday in Charleroi. After his visit to the hospital where they are treated, the king went to the police station where the stabbing took place, told the royal palace Monday.

In the Walloon place Filip speaks with municipal employees and agents that Saturday were working when a 33-year-old Algerian, the two cops at the entrance of the office wounded with a machete.

The two victims suffered severe injuries to their face and have to undergo plastic surgery. One of them has two bullets fired at the perpetrator, who was eventually shot by a third agent.